Five Days, Five Gigs, and a lot of LOVE x

The Album Launch!
With a surging pride we took to the precarious and TEETERING stage to formally announce our BEAUTIFUL new ALBUM.
A SELL-OUT crowd of over one HUNDRED people listened to us.
How utterly humbling x
During the show we introduced one full time MEMBER who has joined the SWELLING of our RANKS.
His name is Thomas. He is BRAVE, so we call him Brave Sir Thomas. Sometimes we let Sir Thomas play a trumpet. In fact. We just make him do it all the time. He can sing, and bang a drum when we let him. When The Earl of Arran heads to ACADEMIA and PENURY, Sir Thomas will assume THE MANTLE full time.
Mr Daniel Ashby PLAYED A BANJO and wore a BETTER SUIT than any of us. He plays with Slapface & The Hoagies but we STOLE HIM for this show. Unfortunately, Jesmond then forgot where we put him. Perhaps he is still in a field eating apples as a means of survival. Sorry to The Hoagies, we have lost your Slapface. We are very sad.
We also allowed Little Aspy to blow a TROMBONE and he will do that AT THE BEEHIVE tonight. We plan to keep Little Aspy a PRISONER in our Musical Troupe.

Here’s a picture whilst we played This Light Above. Thank you. LOOK AT US. Aww. 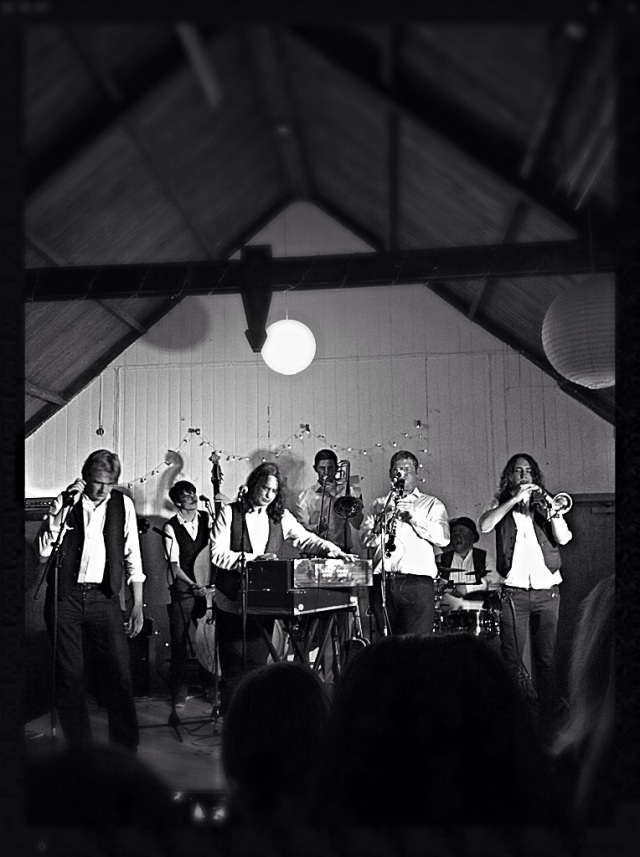 Our 2nd Home, and none of us even live there…
Another fab night at the BEAUTIFUL Beehive. Little Aspy was seen to be dancing with GLEE in a CUPBOARD. That’s how lovely it was. Lots of lovely friends, and Badger’s Australian-based Sister turned up. Hooray.
Did they like the gig? We think so. This is how. Geoff let Miggle borrow his hat. And then Miggle was happy. So happy he banged his LITTLE DRUM very loudly.

We even did a 12″ mix of My Affliction, just for them! How lucky they were!

Here is Geoff, and some idiot holding a carpet, beneath the SACRED sign of The Hive 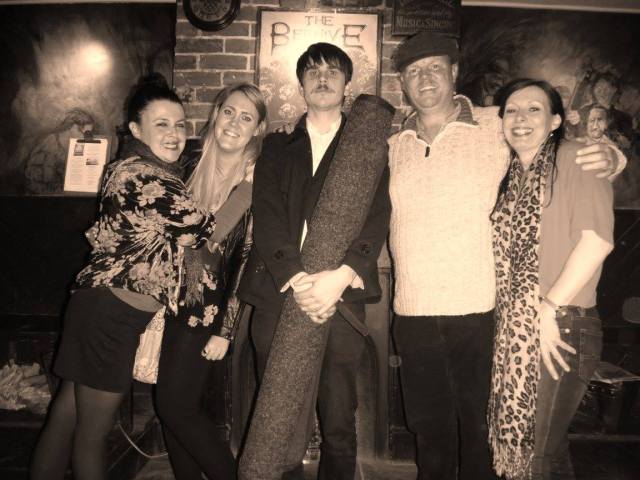 Day Three, at one of our favourite places*
What a genuinely lovely warm reception from some regulars to our Griffin gigs, and some new ones! Badger’s friend and guitar genius, Mr Jessep, appeared. He wore the hat that Geoff wore at The Beehive. It might be the same HAT, which is STALKING us, or we may have just COMPLETELY INSULTED everyone.
The Griffin crowd are a LISTENING bunch at times, and this was no exception. They listened. They listened very closely. Then Jesmond made a little escape of WIND and they wished they hadn’t listened QUITE as closely.
Later on, Stallwood, in a fit of PIQUE and UTTER RIBALDRY, took to OCCUPYING the stage because he wanted to DO BETTER than Miggle. After this photograph was taken, Stallwood was shown pictures of TV’s Own Ray Mears in a state of UNDRESS. This corrected his SURLY behaviour, but also left a SMILE on his face. 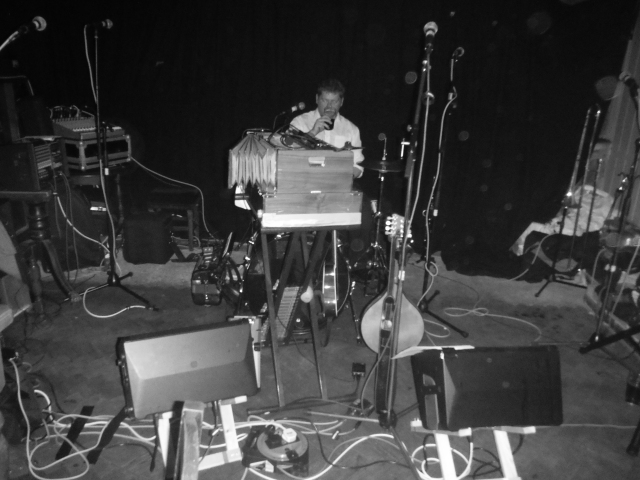 * although, Badger is definitely bringing a flask next time…

Seven Piece Mayhem
So our mini-tour rolls into The Prince Albert and what a FINE feast of FUN that was. It seemed the crowd wanted to STRUT so we made them do this with our INSTRUMENTS and VOICES. Lottie & Miles as always, FINE hosts and of IMPECCABLE music taste, welcomed us and made us eat BEAUTIFUL food, which BODES well for any VISITOR.
The whole place JUMPED and DANCED and SHOUTED. Even STEVE turned up. HELLO STEVE.
And what’s more, we got the most BEAUTIFUL advertisement ever with this… 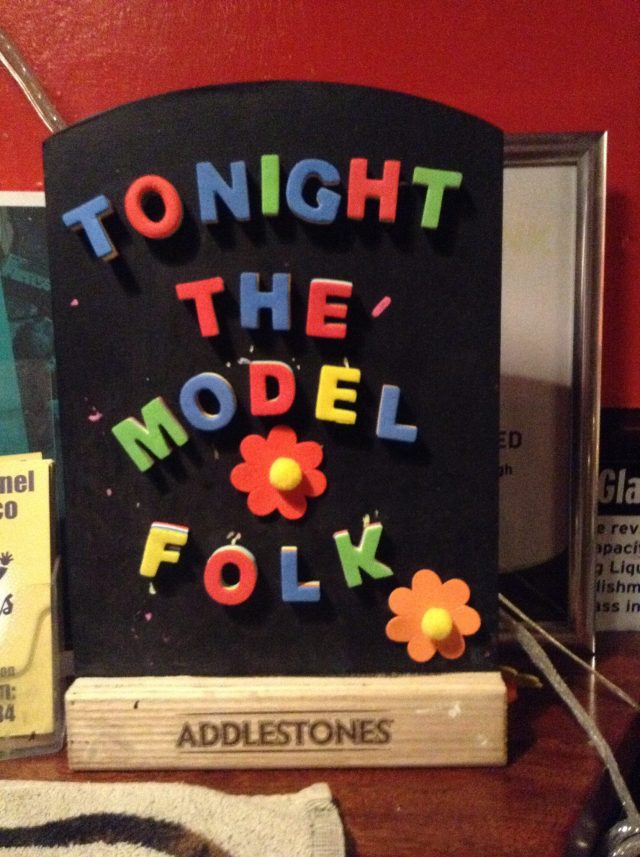 Lovely advert, with beautiful flowers on

… and then… Little Aspy got involved, as did Badger, and strange things happened 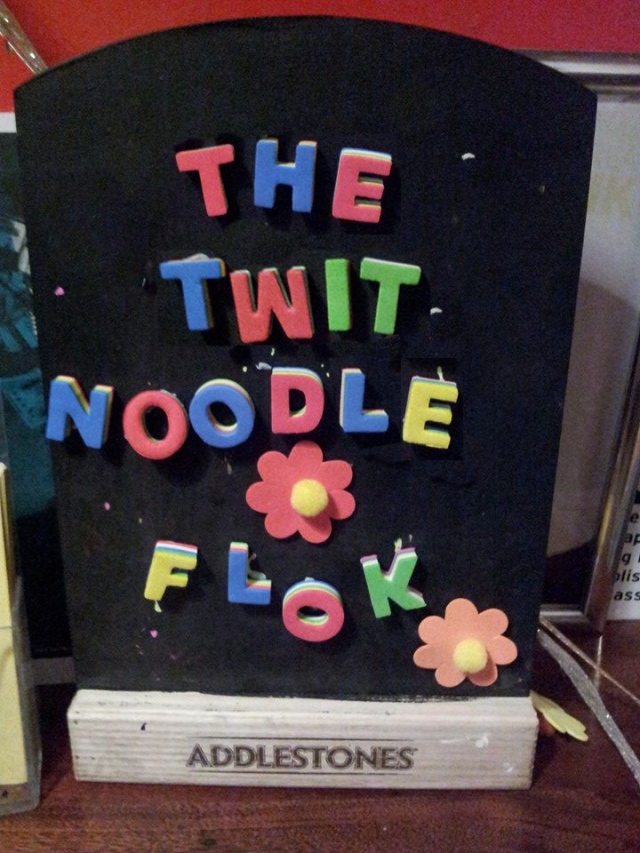 THANK YOU THE PRINCE ALBERT xx

The FINAL date of the TOUR… THE THREE HORSESHOES, BRADFORD-ON-AVON!

Hooray. Amazingly we all felt really fresh and lovely. Like a lovely meadow full of flowers and lambs. So it was with happiness that we arrived at the LOVELY Three Horseshoes in LOVELY Bradford-on-Avon. If you have never been there, you should, because there is a curry house run by a man who looks like Lionel Richie if you have DRUNK ENOUGH.
So, to the CONCERT.
We took to the “Alfresco” Stage as it’s NOT KNOWN, and played to the BEER GARDEN full of LOVELY people. Miggle was even able to dispense his SHINY GOLDEN EGG to Lainey. Lainey was HAPPY with the GOLDEN EGG. So happy she made us write words all over an album she’d bought. Luckily it was OUR album.
Here is the FINAL picture of the tour, fittingly, a DRUM CARPET picture. Look at Maz, him with the hat, he looks grumpy. You may now TAUNT HIM. 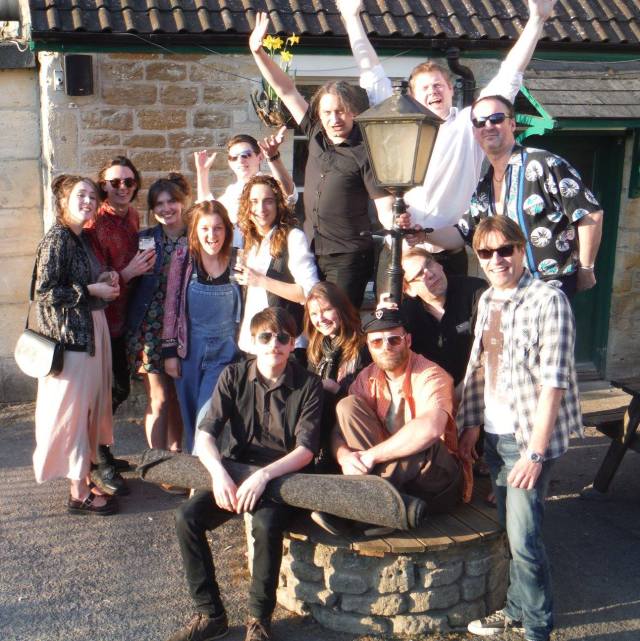